View source
watch 02:17
New Pokemon Games - The Loop
Do you like this video?
Play Sound

Paid naught of coin, but soul.

Change you, up whole,

- Excerpt from "An Ode to Them" (Gaia Praeteritum)

- Lab Assistant (if you talk to him as a construct)

Femboys, all of them are femboys.

Doing the experiment in Laboratory Sigma

Constructs are a humanoid race. They can be obtained by entering Laboratory Sigma, and agreeing to help the Lab Assistant with his experiment. Upon doing so, you will be placed in a green tube. After one minute, you will either die, or become a Construct. Caution though, high chance of death.

Constructs have pale skin, green eyes, and dark blue hair. Like Cameos, this race's appearance builds upon your previous race's looks (If you are a race that doesn't have hair you will not have hair until you rejoin. If you have hair, you will get blue hair). You will keep your previous name upon transforming into a Construct. However, when you get wiped or rejoin the server you got Construct in, you will lose your past race's features (except for the face Haseldans keep berserk mode (my friend got cons on a shinobi haseldan evamp first try and when he got low he went into berserk, even after logging and in private servers), Ashiins keep their trained fist combat, Mercenary Carry and while in khei/ps they have Shoulder Throw, and Azael keep snap gate without using a snap slot). (More than just these were kept a long time ago). 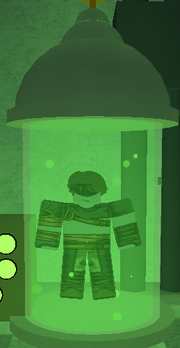 Getting Construct is really luck based.

Community content is available under CC-BY-SA unless otherwise noted.
Advertisement